The San Gabriel Valley Panthers were founded in January 2018 by Darren Keepers in South Pasadena, California. They began practices in May 2018 with only four players and one volunteer. News of the team spread through word of mouth among players and social media. Later in the summer of 2018 the Panthers were featured in local newspapers as well as being featured on morning news broadcasts for KTLA 5 and Fox 11 KTTV  in Los Angeles.  In 2019 they played and won five competitive games. Currently the Panthers roster has 15 players and 8 Volunteers.  The next step for the Panthers is playing in the Beep Baseball World Series! 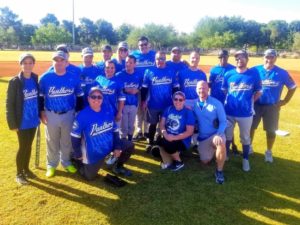